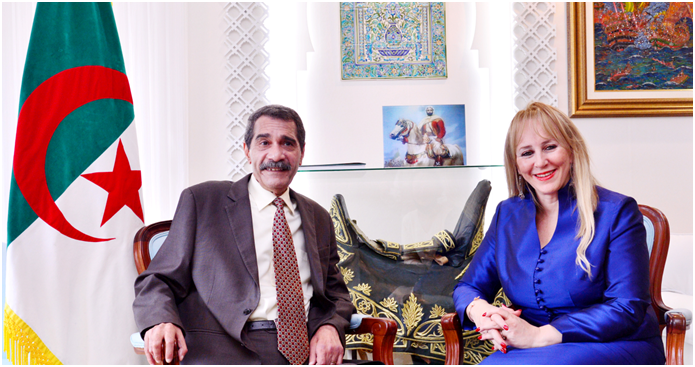 Algerian Ambassador to Korea Mohammed El Amine Derragui (left) and his spouse Chafika Derragui pose in a photo session during an interview with The Korea Herald at his residence in northern Seoul on Feb. 25. (Park Hyun-koo/ The Korea Herald)

Algerian women joined the country’s fight for independence, taking on an equal role with men on the frontlines during the 1954-1962 Algerian Revolution.

Due to their significant role in this historic event, women are given relatively equal legal rights to men in Algerian society, according to the country’s Ambassador to South Korea Mohammed El Amine Derragui.

“During our Liberation War everybody participated for the freedom from foreign occupation. Ladies too took part in this fight, not only as nurses, but also as real freedom fighters, with arms and they were fighting,” Derragui said in an interview with The Korea Herald on Feb. 25 in northern Seoul.

“So it was almost natural and logical that women continue to contribute to building the country. … Women’s participation was essential.”

Echoing Derragui, his spouse Chafika Derragui described Algerian women as “having mostly all the rights.”

In recognition of their sacrifice and bravery, some female figures are respected as martyrs and revolutionary icons.

Gender equality in Algeria is stipulated in the country’s constitution, adopted in 1963, as well as ensuing revisions to align with societal changes.

“This constitution provided for equality between men and women … education, since the first day of independence, was compulsory and free for both girls and boys. Of course we had to open the doors for participation of women in all activities of the country across political, economic and social (realms),” Ambassador Derragui said.

Derragui was appointed as the ambassador to Seoul in April of 2015, before her stints as envoy in Iran, Uganda, Burundi and Rwanda and his service as Charge d’Affaires in former Yugoslavia.

Women in Algeria account for two-thirds of graduates of higher education, according figures provided by the embassy.

Empowerment of women also required changing the perception of men, for them to break away from conventional paradigm.

“The work was done not only in direction of women, to convince them the necessity to be very active in society, but also directed at men. If men stuck to his (traditional) position and mentality, we would have to work to change their mentality and make them accept women as full equal partners,” Derragui said.

In celebration of March 8th International Women’s Day, the embassy invited Algerian women living in Korea to encourage their endeavor.

“It’s the day we commemorate the rights of women. In the last century, women were fighting for their rights and gender equality. I think what has been achieved during the last century is certainly of great importance,” Ambassador Derragui said.

“But still there is a lot to achieve and that’s why this day is the occasion as a reminder that the job is not over. All the endeavor should continue in order to achieve full equality between men and women everywhere in the world.”

The number of Algerian women pursuing studies and career in Korea, geographically far away from the North African country, has caught the attention of the ambassador’s spouse.

“I just want to say that before we didn’t see Algerian women very far (from Algeria). They couldn’t go far to continue their studies; they were (mostly) going to Europe for example. … I was very surprised to find that there are many (Algerian women) coming (to Korea) for studies and work,” she said.

As for bilateral relations between the two countries, this year marks the 30th anniversary of diplomatic ties, established in January of 1990.

Looking back at the 30 years Ambassador Derragui said the friendly countries did “very well” in economic collaboration, while expressing hopes to attract more investments from Seoul.

“I should say we have done very well, not only well, in terms of trade exchanges, in terms of institutional economic cooperation,” he said.

“Of course we could do better. … We are thinking of improving our foreign investment laws. We hope with these changes Korean companies would be more encouraged to invest in Algeria and all the sectors of economic activities are open. … Algeria, given its geographical position, is an open door to both Europe and Africa.”