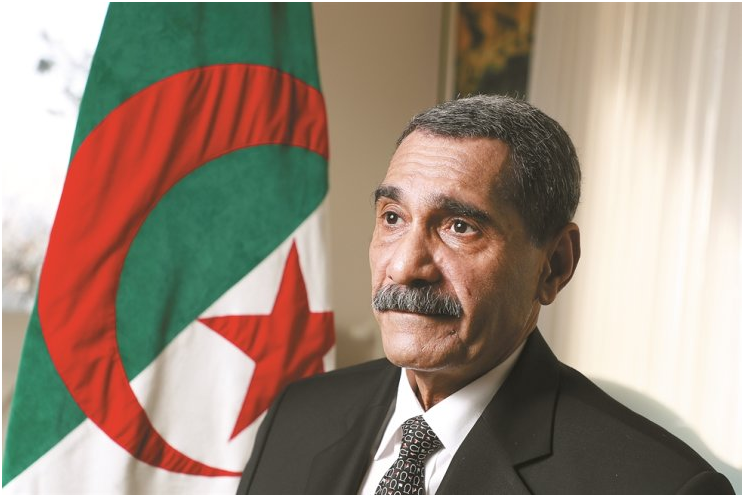 Algerian Ambassador to Korea Amine Derragui encourages Korean businesses to invest in his country’s tourism and agriculture sectors, during a recent interview with The Korea Times to mark the 30th anniversary of diplomatic ties on Jan. 15. / Korea Times photo by Choi Won-suk

Being the largest country in Africa, Algeria covers an immense stretch of climatic regions and landscapes that give a unique experience for tourists throughout the year.

The 2.38 million square kilometers of land extends from the 1,622 kilometers of Mediterranean coastline to the sandy dunes of the Sahara Desert, through which the Algerian government is pushing to bolster the agricultural industry in accordance with the climate.

And Algerian Ambassador to Korea Amine Derragui says he encourages Korean investors to explore the tourism and agriculture businesses, as the two countries mark the 30th anniversary of diplomatic relations this year.

Both tourism and agriculture are among the many sectors that Algeria seeks to nurture as part of efforts to increase foreign investment, shift away from an oil-dependent economy and diversify it.

The two have higher potential to grow than other fields, because they are lesser developed and also lesser known in the rest of the world, especially in Korea, according to Ambassador Derragui.

“The 30th anniversary is an occasion to have a look back at what has been achieved, to look forward what could be done in the future in terms of development, in terms of deepening and enlarging relations between our two countries,” he recently told The Korea Times. “And I try to emphasize these two new sectors because their potential is huge in Algeria and this has not been explored.”

The North African country is characterized with four climatic and geographical features that run parallel to each other down the length of the country.

The northern-most part or the Tell incorporates all of the country’s coastlines which the ambassador recommended for a summer holiday.

The Tell is also described as a hilly, sub-coastal zone where, despite its small size, more than 90 percent of Algeria’s 43.4 million population live.

The area is where the major cities, including the capital Algiers, are scattered along or near the coastline.
It is a fertile region and that “all kinds of vegetables and crops except for tropical ones” can be harvested, according to Derragui.

The Tell Atlas mountain range comes across the south of Tall, with its impressive peaks, valleys and plateau. The area includes Chrea that has been dubbed as one of the world’s most unexpected winter sports sites.

The third section is made up of other mountain ranges that form Algeria’s Saharan Atlas range.

The Sahara Desert covers over 80 percent of Algeria’s land area.

Although it is known as a forbidding desert where the Earth’s hottest surface temperatures have been recorded, it also offers stunning scenery and has oases with enjoyable spring weather.

“It is a country that can attract tourists not only in summer or in the winter, but throughout the year because they can find interesting places to spend their holiday at any time,” Derragui said.

The envoy reckoned the “time is ripe” for Korean investors to come in on the 30th anniversary of bilateral ties, because Algeria has completed building necessary infrastructure, such as road, highways, power stations and irrigation system across the country.

The ambassador underscored Algeria’s geographical location of being in the middle of Europe, Africa and the Middle East gives another advantage for potential investors by giving an access to regional markets.

“The goal of drawing international investment is also to diversify our economy and let us go from an importing country to exporting country in different sectors,” he said. “Any companies that have experience abroad are welcome to invest in Algeria,” he said.

The country has been allocating public land for agricultural use to the private sector on concessional terms.

Algeria and Korea established diplomatic ties on Jan. 15, 1990. They formed a strategic partnership in 2006.

The oil and gas sector is the backbone of the Algerian economy, accounting for about 20 percent of the gross domestic product, and 85 percent of total exports.

Algeria’s export to Korea amounted to $2 billion in 2018, with major items being crude oil.

The former’s 2019 import ranged from cars to ship spare parts and electronics, totaling at $900 million.
About 30 Korean firms run business in Algeria.

The two countries had a pair of reciprocal presidential visits for the past 30 years, with Roh Moo-hyun traveling Algiers in 2003 and Abdelaziz Bouteflika coming to Seoul in 2006.

Prime Minister Lee Nak-yon became most recent, highest-ranking Korean official to visit Algeria when he went there in 2018 as part of three Africa-nation trip including Tunisian and Morocco.

Derragui said the two countries will capitalize on such exchanges, saying, “We are planning for 2020 to organize more high-level contacts to have a round of political consultations between the two ministries of foreign affairs.”

“It will be an occasion to exchange views on many issues of common interests … I guess that 2020 will be quite a busy year in terms of cooperation and relations between the two countries,” he added.

Since its independence from French colonization in 1962, Algeria has been offering free education from primary school to university for both men and women.

At universities, the rate of enrolled female students is above 50 percent and is higher than that of men.
Such pool of educated human resources will help Korean investors when they want to invest in various fields, according to Derragui.

The envoy assessed cultural exchange and people-to-people ties can be an effective tool to enhance bilateral ties.

For this reason, he said, the embassy embarked on 30th anniversary celebration in October 2019 by organizing a joint concert at Seoul Plaza.

The celebration at open space allowed public to freely join in, in contrast with other diplomatic receptions that are mainly held at a banquet hall in a five-star hotel and are open only to invited guests.

When asked about popularity of Korean Wave, the ambassador said it has been expanding from major cities to rural areas and that can help raising better awareness toward Korea among Algerians.

Derragui has been serving in Korea since 2015.