The North African country of Algeria is a melting pot of cultural influences, from French to Spanish to Berber and Roman. This blending gave way to a fantastic architectural variety, much of which still exists today.

We begin our listing of Algerian architecture with the well-preserved Roman Baths of Khenchela, known also as Hassam Essalihine. In a remarkable state of preservation, this is an architectural beauty and quite the hidden find too.  Originally constructed in the first century AD, the brickwork is an Ottoman addition and the changing room doors are likely not originals either. Chat, in French or Arabic, with the locals and either soak up the history or take a soak in the gorgeous circular bath. 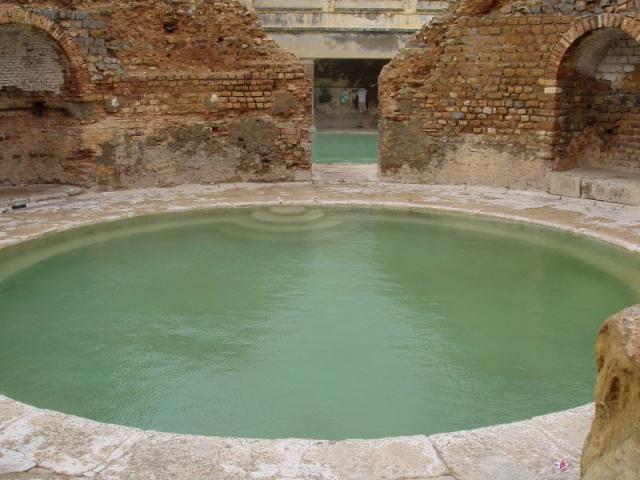 The M’Zab Valley is situated in the Ghardaïa Province of Algeria in the Sahara desert and is made up of five Mozabite towns: Ghardaïa, Melika, Beni Isguen, Bounoura and El Atteuf, the former of which is home to a stunning labyrinthine casbah. The unusual architectural beauty of this cluster of dwellings and towns is what makes this UNESCO World Heritage Site so special. Buildings are densely packed, replete with twisting and turning narrow alleyways, covered walkways and pastel colored paint. The visual impact is truly impressive, situated as they are in the deep and narrow valley. Having been established by a breakaway Islamid sect some 1000 years ago, they were designed for communal living, an intention which is clear to see to this day. 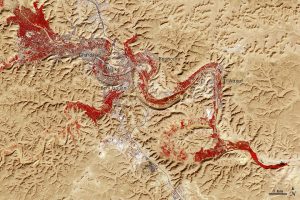 This striking architectural design piece is less of a building and more of a monument; however it is just as impressive. Opened to the public in 1982, the same year the M’Zab Valley was celebrating its recognition as a UNESCO World Heritage Site, and just 20 years after getting independence, this spectacular feat pays tribute to the lives lost in the Algerian war which led to said liberation. Commonly known in English as The Martyrs’ Monument, it consists of three giant, concrete palm shaped leaves reaching skyward for almost 100 meters and coming together to create the unmissable and easily recognizable, architectural achievement that it is. 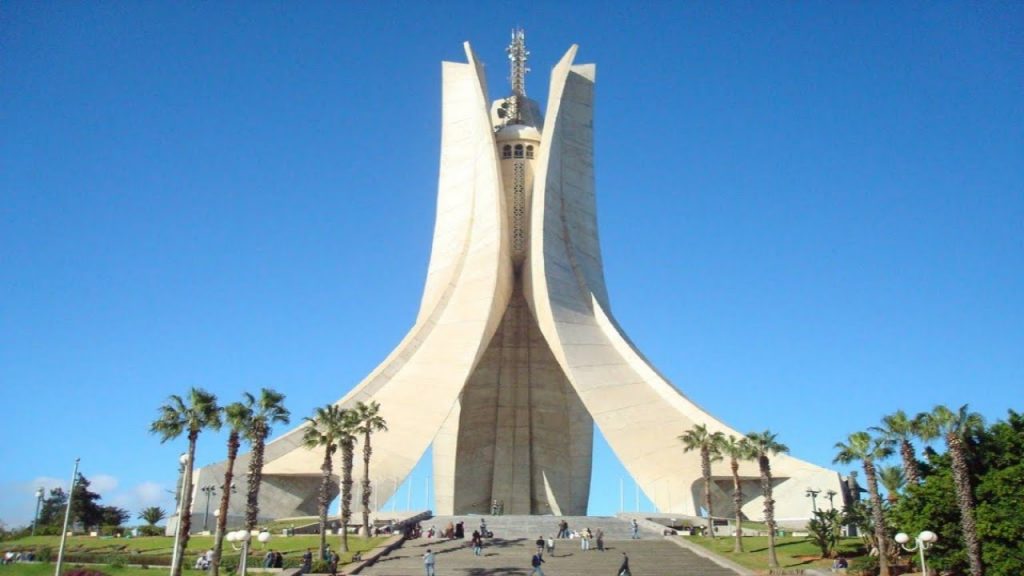 Taking a step away from Roman and Muslim architecture, we focus our attention on the remarkable Catholic Basilica of Notre Dame d’Afrique in Algiers. Inaugurated in 1872, it’s significantly newer than some of the entries on this list but no less worthy of a spot. Featuring an unusual floor plan, with the choir on the southeast rather than the east side of the building, it was designed by French Algeria’s chief architect for ecclesiastical buildings, Jean Eugène Fromageau. Despite having undergone several reconstructions throughout the years, its essential essence remains, along with its famous colonial inscription: ‘Notre Dame d’Afrique priez pour nous et pour les Musulmans.’ (‘Our Lady of Africa, pray for us and for the Muslims.’)
Notre Dame d’Afrique, Rue de Zighara, Algiers, Algeria, North Africa 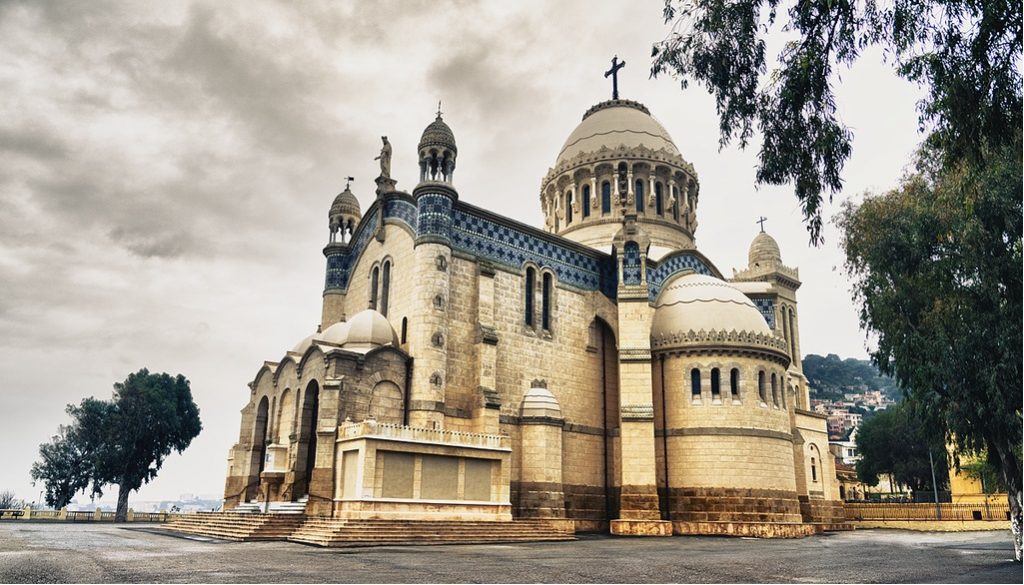 One of North Africa’s most important Islamic buildings, The Great Mosque is also known as Djama’a al-Kebir and features an inscription on its base which testifies to the fact it was constructed in 1097. Standing at 300m tall, it’s an imposing structure and claimed to be the oldest mosque in Algiers; however many changes have been made to it. It’s alleged that the beautiful minaret was a 14th-century alteration made by the Sultan of Tlemcen. Either way, it is one of the few remaining examples of Almoravid architecture and is well worth stopping by and marveling over. 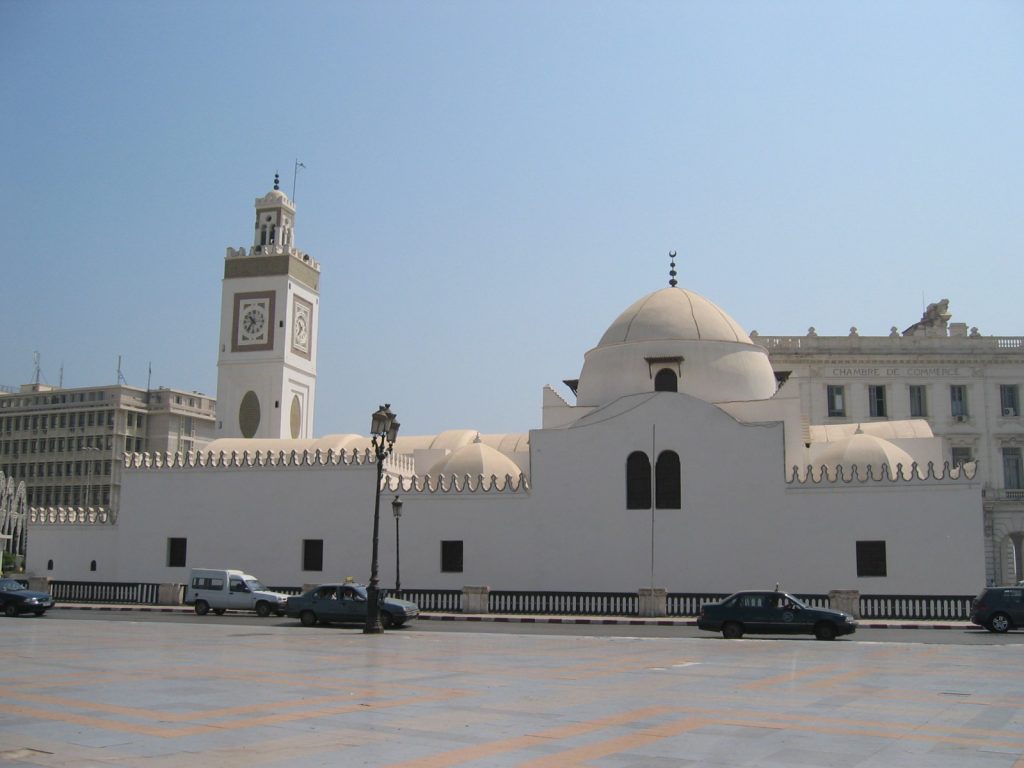 When you think of beautiful architectural feats, post offices may not necessarily be the first thing to cross your mind, particularly not in this digital age. However, prepare to have your mind changed by La Grande Poste in Algiers. This is a stunning example of neo-Moorish architecture, slap bang in the center of this vibrant city. But its white outer walls are nothing compared to the highly decorative and impressive interior, so don’t forget to go inside and soak it all up. Popular with tourists, and perhaps Algiers’ most famous landmark, it is still in use daily by the locals. 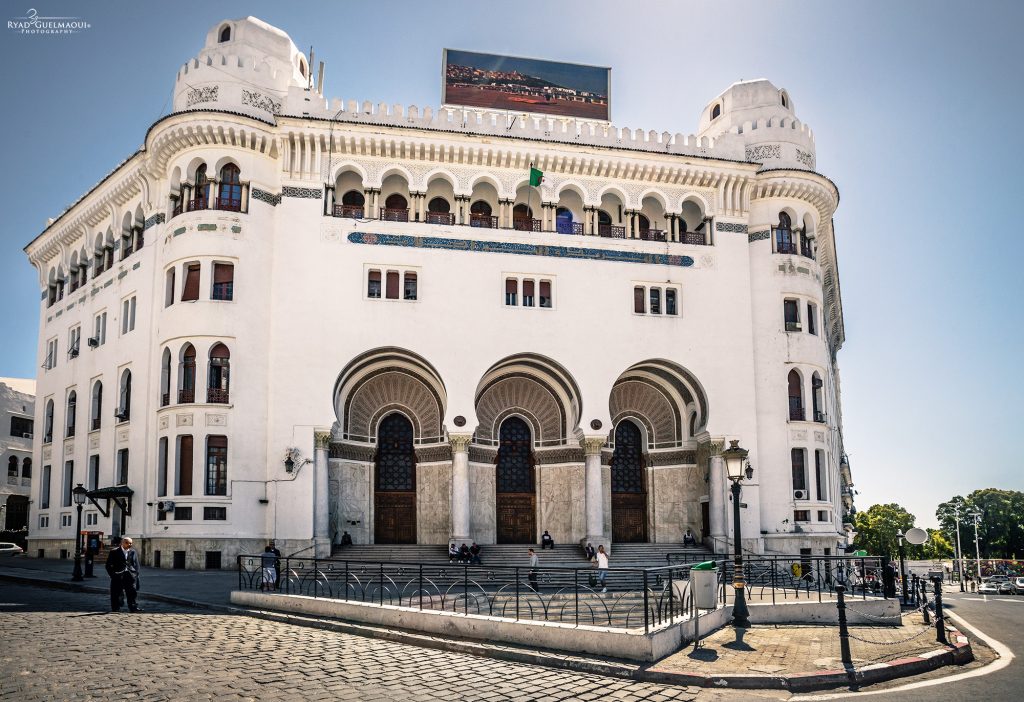 The Tombeau de la Chrétienne translates in English to the Royal Mausoleum of Mauretania and is a unique funerary monument situated between Algiers and Cherchell in the M’Zab Valley. In it are buried two prominent figures in the country’s history, Berber Juba II and Cleopatra Selene II, the former king and queen of Mauretania, respectively. Built in the third century, it’s alleged not to have been solely intended for the king and queen, but rather for their descendants too, however Cleopatra Selene II ended up being the last Queen of Mauretania. Architecturally, it has clear Ancient Greek influence in its design: built on a hill it is made in a circular shape, entirely from stone, and topped with a pyramid shaped roof. 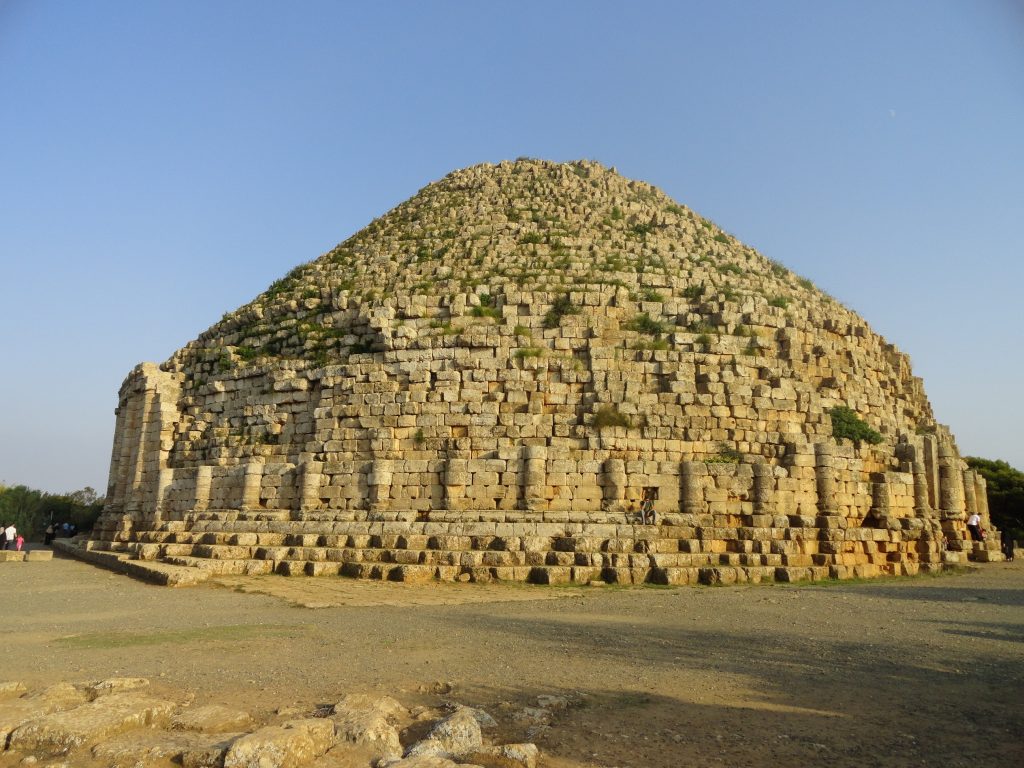 One of the most important landmarks in Algiers, the Palais des Raïs is situated on the waterfront and is sometimes known as Bastion 23. One of the last notable remnants of the Ottoman Empire in Algeria, and a crucial piece of evidence which asserts that said empire extended the Casbah de Algiers’ to the sea, it was designated a UNESCO World Heritage Site in 1992. Now home to the Centre des Arts et de la Culture, it is in fact an amalgamation of several houses, linked to create one large edifice. The Ottoman-period mansion is the stand out of the Palais des Raïs however, with its sometimes painted and elaborately tiled ceilings and sense of grandeur.

The Great Mosque of Tlemcen

Tlemcen, which literally translated means ‘the town of cherries,’ is an amazing Algerian location to visit, but its most prominent attraction would have to be the Great Mosque of Tlemcen. Not to be confused with The Great Mosque in Algiers, this mosque is one of the best preserved examples of Almoravid architecture and for that reason alone should be worth stopping by. Dating from around 1082, it was first constructed by sultan Yusuf ibn Tashfin but then reconstructed some 100 years later under the rule of his son Ali ibn Yusuf. Finally, another sultan deigned it fit to add a minaret and a dome in the 13thcentury, and the culmination of these reconstructions and additions is The Great Mosque of Tlemcen that we see today. 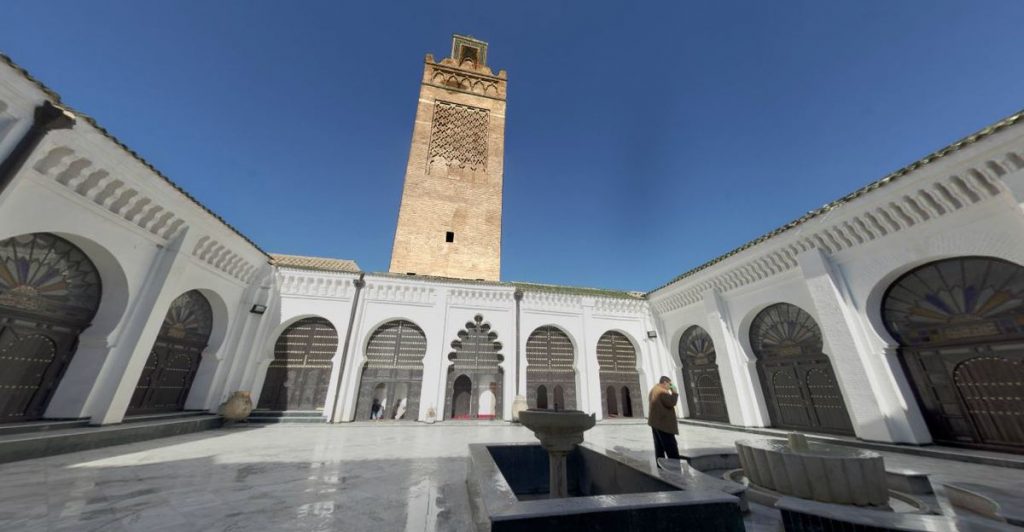 Notable for its unique fusion of Byzantine and Moorish architecture, this mosque is situated at the bottom of one of the Casbah de Algiers’ first steep stairways, giving it a symbolic and logistic importance, historically speaking. First built in 1612, it has survived many occupations and a change from mosque to cathedral and back again, without losing its impeccable sense of grandeur and beauty. In design, it is stunning: ornamental porticoes supported by black veined marble columns, Moorish plaster work, and octagonal minarets are just some of the many highlights. 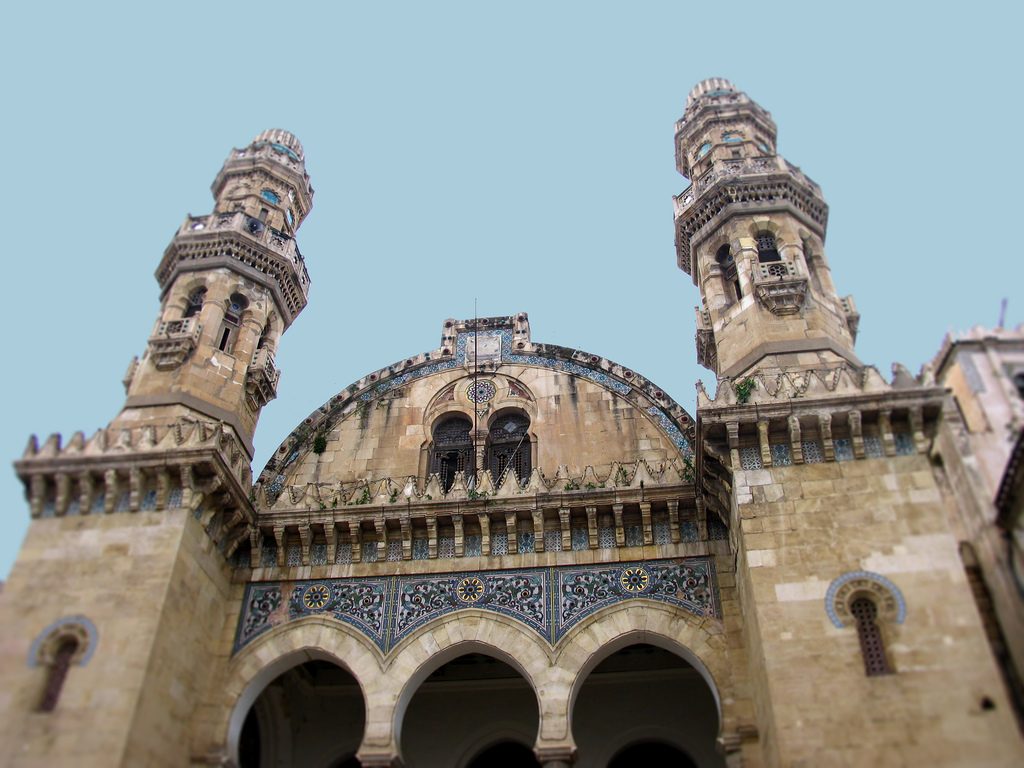